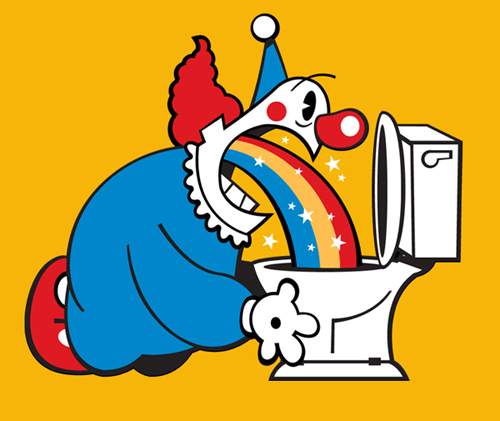 From Threadless, probably the best t-shirt designs on the Web.

Was on the phone with my middle sister, and she mentioned that her husband got a bad case of food poisoning yesterday.

"He told me it's the first time he's vomited in over ten years," she said.

Quite naturally, I began to wonder how many times I'd vomited in the past ten years. It came out to seven. The scary thing is I can remember the details of each puking incident. Shockingly, all were alcohol-related, and I'm ashamed of all them. Not because of the whole irresponsible-drinking-to-excess thing, but the can't-keep-my-liquor-in-my-stomach thing.

Here they are, chronologically ordered, starting with the most recent:


Hodori
This was back in May, when

lexxy_pie were in town during E3. I think what started it were the horrificly rancid Bacardi 151 shots at Mountain Bar. And what definitely ended it was when somebody bought me an enormous shot of piss-warm Patron, which turned out to be 3 shots. I don't remember much after that, but I do recall finding myself sitting at Hodori, then quickly walking to the bathroom and unleashing my innards. When I woke up the next morning, I took off my t-shirt and discovered that the back was completely covered with writing. From two different people.

Ghostbar
Last summer in Vegas, I found myself at Ghostbar smoking a Macanudo during a bachelor party. I've never had a pleasant experience with Cuban cigars, particularly when teamed with alcohol. I was already drunk by the time I got to Ghostbar, so things weren't going to turn out swell anyway. But then the bachelor made me do several revenge rounds of Goldshlager shots (Story here.), and suddenly I was feeling extraordinarily unwell. After trying to fight the urge to vomit for several minutes - during which my sympathetic friends took tons of pictures of me looking greyish green - I ended up in line at the men's room. There, a drunk girl forced me to spank her drunker friend, twice, which only expedited my need to blow. At that point I couldn't wait in line any longer, so I ran to the elevator and, once I got out of the elevator, I sprinted to the line-free casino bathroom. Once I was done puking though, I not only felt better, I felt refreshed, rejuvenated and mysteriously sober. My friends were stunned when I rejoined them. It was as if I were replaced with a peppy clone by aliens hiding in the stall.

Karnak
This liquid laughing incident about three years ago was less about severe intoxication and more about a severe allergic reaction. I did drink this night but just a couple of shots of Johnny Black. And one K-Town shot is basically a third of a real shot. To this day I still don't know what I developed an allergic reaction to; but while dancing, I suddenly felt my face rapidly inflate like the fucking Elephant Man. The moment I thought my throat was about to swell up, I immediately ran outside to get my car so that I could get home and pop some Benadryl. While my girlfriend and I waited for the valet, I crouched next to a wall and chucked all over the sidewalk. When I was done, I realized that my throat had opened up. Vomiting was my hero.

Shanghai
Ah yes, 2001, at a lounge in Shanghai. Probably the most I've ever drunk in a single night: an entire fricking bottle of Johnny Walker. Not surprisingly it was probably the hardest I've ever chundered. The force was so powerful that the puke also shot through my nostrils like an angry dragon. I wish this scene could've been videotaped for personal curiosity, and of course, for the benefit of mankind. I spent 15 minutes afterward blowing chunks of local Shanghai cuisine out of my nose.

Wedding
Was at a wedding for the girlfriend's friends six years ago. I'd been told that the groom, ironically a regional sales manager for Hite Beer, was a very light drinker; but his petite new wife could outdrink God. I found this very difficult to believe. She weighed less than a hundred pounds and barely topped the five foot mark. During the post-reception party, perhaps sensing my doubt, the bride planted herself right next to me and asked me to do whiskey shots with her. I obliged. Next thing you know, we were engaged in a heated drinking contest. I lost, badly. After I staggered to the bathroom to hurl, I sat down next to my girlfriend and promptly passed out. I was shaken awake by the concerned bride, still looking completely sober after 20+ shots, who handed me a cup of coffee and my he-bitch license.

Olives
This was easily one of the stupidest things I've ever done, and I was brutally punished for it. A couple of friends and I were having martinis back during my martini phase. Not having eaten any dinner, I found myself scarfing down the olives that were stored in an open container on the bar. As the night was coming to an end, I got a call, which at that time of the evening usually means sex. Eating all those bar olives was a very bad idea, and my stomach was none too happy. But I shook it off and decided to answer the call of the booty. About five miles from my destination, I realized that my stomach had lost its olive battle and was going to surrender its prisoners. Gritting my teeth, I pulled off the next freeway exit, made an immediate right and parked the car. I was about to open the door and boot when I saw the cop pulling over another car just a block away. At that very instant, I puked all over my sweater, my pants, my seat and my shoes. I turned the car around and went all the way back home to clean up, intercourse-less. Luckily the car was a lease, which expired a week later.

Birthday
Ten years ago, my friends threw a surprise birthday party for me. I ended up having to do a shot with every person there, two for each girl. I think it was the peach-flavored schnapps that ended me. I went to the kitchen to drink a glass of water and as soon as I was at the sink, it just shot right out like a levee had burst. If that weren't bad enough, two of my female friends found me puking in the kitchen and started massaging my back. I tried to explain to them that I preferred to be alone, but my mouth was too busy barfing out spinach and mushroom curry.