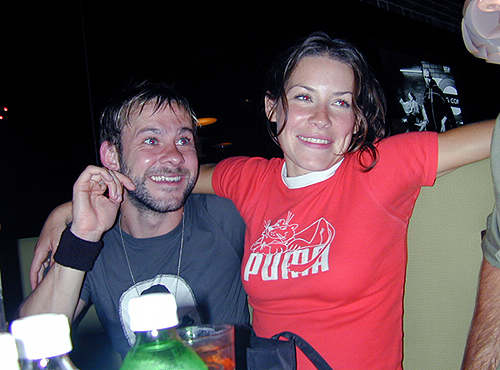 Perhaps it's because my social life isn't what it used to be. Maybe it's because, according to several articles I've read, that the quality of non-reality TV shows have vastly improved in recent years. Or maybe it's because I've rediscovered the joys of lying on a couch with a cold beer on my belly and a remote in my hand as Zach Braff daintily sips his appletini.

Whereas I used to only watch two or three TV shows regularly, that number's now grown to almost ten. "Scrubs", "Arrested Development", "Curb Your Enthusiasm", "Entourage", "The Sopranos", "Family Guy", "The Simpsons", "Rome", and "Lost."

Can I tell you how giddy I am that "Lost's" season premier is one day away? So many fucking unanswered questions ... with the biggest being how Merry managed to score one of the hottest women on the planet, Evangeline Lilly. How is this possible? The guy is not especially rich or famous; however he did help Eowyn defeat the Witch King at the Battle of the Pelennor Fields.

My theory is that being stuck on a remote, isolated set on an island, working 14-hour days, you go with what's available - many an actor couple has hooked up this way. Unfortunately for Evangeline, the only two unmarried males were the fat guy and the short guy. Fortunately for Dominic, the girl didn't dig fatties. But one would think that as soon as the shooting was done and Evangeline returned to civilization, she'd look down one night while drinking cran-&-vodka at a bar and ask, "What the hell is this sweaty dwarf doing nestled under my armpit?"

But until that happens, there will probably be a moment on Wednesday night when I'll briefly put down my remote to angrily shake my fist at the heavens.

And before you comment about this: no, I haven't seen a single episode of "24," and yes, I've heard it's even better than "Lost." But one of these days, I may get around to renting the previous and very first seasons.