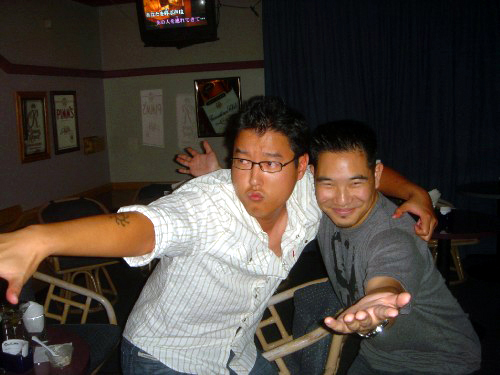 naka_chan) birthday on Thursday. I didn't know this until he text-messaged me at my office to see if I wanted to meet up for some ramen in Gardena followed by drinking at his mom's karoake bar. I couldn't make the ramen part, but I was able to make the drinking part.

I don't really venture to this pocket of Southern Cal much, if at all, so I'd forgotten how many Japanese and Korean businesses there were in Gardena. This even out-Japanesed my hood, Sawtelle. I pulled into the karoake joint's parking lot and walked in.

Last year when I went to Paul's birthday at a noraebang, it was a very mellow affair. The only alcohol in the room was the bottle of Goose I'd brought, and Paul and I were the only ones who drank. The rest of his friends solemnly sang Christina Aguilera songs while the others quietly watched with their hands folded nicely in their laps.

"Are these your church friends?" I asked Paul.

This year it was a different story.

When I learned that Paul's mom ran a karaoke bar, it all made sense. Genetically speaking, it's as if Paul's DNA was engineered specifically for him to exist only in karaoke bars. Because the dude can drink and the dude can sing. Me, I can wiggle my ears to the delight of children everywhere.

It was Paul's mom's idea for him to go out drinking on his birthday - she even joined us for a couple of shots. Hmmm, maybe she's my real biological mother.

There was a collective determination to not repeat the mistake of last year's birthday, and we kept ordering round after round. Throughout the course of the evening, the cowboy hat-wearing bartender was busy slicing limes and emptying Patron bottles into rows of shot glasses. I lost count after the fifth shot, but by the end of the evening, I was bellowing "Just A Gigalo" into the mic as weeping Japanese businessmen cut their heads off with samurai swords.

As for Paul's friends, Señor Patron was not very gentle with them, but it made for some really entertaining photos ... 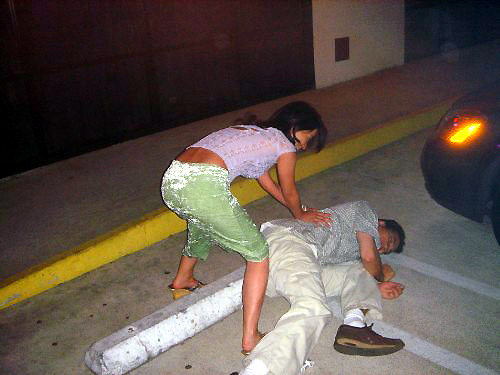 It occurred to me as I slammed myself onto my mattress at 3 AM that I'd be going to work in a few hours as an unhappy man. This turned out to be a very accurate forecast, but nothing a cup of strong coffee and a sixpack of Frosted Donettes couldn't fix.