In the past four weeks we've seen each other three times, which is a lot nowadays. Funny thing is it seems like ages ago that we'd see each other all the time. Especially every Friday and Saturday night, everybody would automatically show up at my place at 7:30. It was like "Friends," except with shittier furniture and more drinking games. We even named our coed volleyball team "Our Place At 7:30," and God punished this act of gayness by making us go 1-5.

At the time, the last thought that entered my mind was that this would all come to an end someday. As friends are wont to do, they move on to other things. They get into serious relationships, move to other cities, or accidentally fall into a transdimensional gateway and become a squid king's concubine. 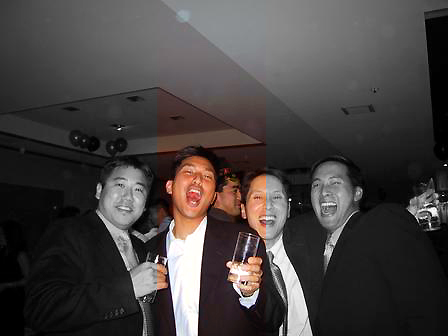 The birthday girl, Cindy, is currently raising money for the Leukemia & Lymphoma Society in memory of a loved one, Steven. He died about four months after this pic was taken. If you've been reading my journal for a while, you might know whom I'm talking about. Cindy's already reached $10,000. It's pretty damn amazing. You can learn more here.

Sticking to this entry's theme of linking to friends, my friend Emily has been multitasking like a moofoo lately with her acting and producing. You can check out her new Web site here.

The last link is to the site for Rog's upcoming movie "Annapolis", which was directed by Justin Lin of "Better Luck Tomorrow" fame. That's Rog on the left in yellow trunks, boxing his way into the hearts and loins of firm, young naval cadets.