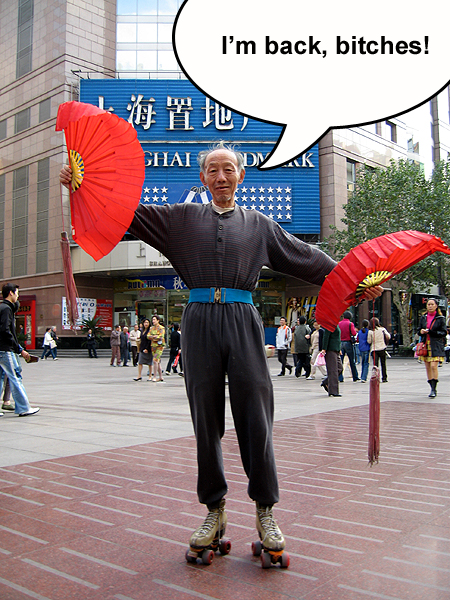 Will be posting China pics next week. In the mean time, you may gaze upon his eight-wheeled majesty.

You know when you've got someone visiting from out-of-town, and he says something like "I've got a really early morning flight tomorrow," and you respond, "You might as well stay up all night?" Then everybody chuckles and wag their fingers at each other in a "Why you wacky rascal" kind of way, and go to bed early.

As it turns out, I was that out-of-town visitor that everybody told to bypass sleep. And they succeeded. Somehow last night turned out to be one of the craziest of the trip. Mother of God, why oh why did I think it was an amusing idea to slam Long Islands with T for old time's sake? It used to be our drink back when we were young and broke, because it was a cheap and effective method of self-hammerment. After the fourth round, I remembered why we stopped drinking that liquid garbage.

And if that wasn't stupid enough, we left Lan Kwai Fong for a Korean joint in Kowloon, where some crazy fucker ordered buckets of vile, vile soju. And by buckets, I mean plastic buckets packed with soju bottles. For my farewell breakfast, we had Black Label.

I then staggered into my hotel room, quickly packed, and caught a 5 AM taxi to Hong Kong International Airport. By the time I boarded my plane, I was feeling the direct opposite of splendid. If you're not a big fan of being stuck in a tiny coach seat for 10+ hours, sometimes you wish a bat-wielding stewardess would hit you in the back of the head as soon as you entered the plane. Well, I've now found a way of knocking myself out for the trip that doesn't require a blunt instrument. When I woke up in my seat, I was well on the other side of the International Date Line, just a couple of hours from LAX.

I cabbed it back home in the rain, dropped off my bags, took a hot shower and drove to work. As I pressed the elevator button, I noticed a somewhat depressing sensation. It felt as if I've never left.

On a completely different topic, remember this entry about Morning Masume? Well this time they take on a giant flesh-eating lizard with meat strapped to their foreheads. You've got to click this and see the video, or you'd think I was making this shit up. As you'll see, no matter how deranged or crazy my twisted imagination can get, it's already a TV show in Japan.