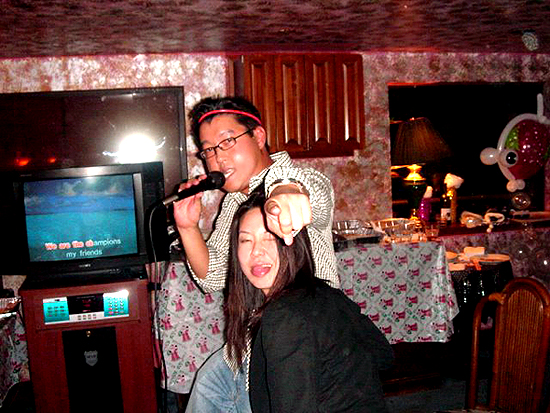 Me sporting a Queen-Songs-Are-Better-Sung-With-A-Deformed-Underbite face and a drinking buddy at a friend's bar-passing party. If I have to explain the pink glow tube wrapped around my head, then I'd have to explain alcohol. And, quite frankly, I ain't gots the time for that.

Finally had dinner at Sasabune's brand new location last night. Their former joint probably used to be a tiny dive of a Mexican restaurant, and when he moved in, Sasabune's owner just threw in a sushi bar and kept the rest of the grungy interior intact. The same decorating philosophy applies for the new digs on Wilshire, which used to be a Todai. At least this time they actually put up a sign.

As for the omokase: Except for the disappointingly decent yellowtail, everything was great as usual ... although the toro was otherworldly. It's hard to believe it came from something as mundane as a fish. And as usual, I was on the verge of vomiting when the blue crab and toro hand rolls arrived at the end. But somehow I was able to find extra space in my lower right lung; I was even able to finish my girlfriend's roll.

And you know what? She actually misses the old hovel where Sasabune used to be.

As you may or may not know, Comedy Central's airing the only four episodes of Dave Chappelle's third season before he went loco from all that loot. You can see the preview here.

I'm pretty damn curious about the shows. Because ultimately the guy broke down because he felt his show had to be ten times more funny to justify his monster new contract. So either these shows will be incredibly balls-out awesome compared to last season, and he felt that he could only maintain that level of comedic brilliance for four episodes, thereby causing him to quit. Or they'll be incredibly weak b/c the stress rendered his humor flaccid, thereby causing him to quit. Granted, it's just a trailer, but the shows look promising. "Shut up, or I'll burn your feet!"