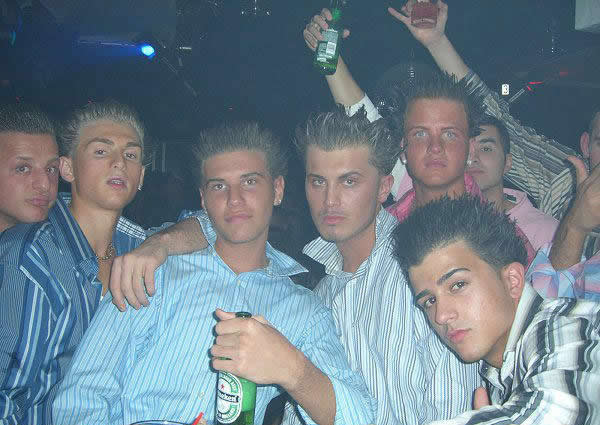 I almost vomited twice this past weekend, and strangely neither incident involved alcohol.

1. Vertigo
Have any of you had this? It sounds like the name of a cheezy nightclub - the kind of joint where you'd find those gentlemen in the above pic. It's also the name of a movie, considered by most film critics to be Hitchcock's best. But on Saturday morning, I woke up to find the world spinning. It was as if I'd spent the entire night sleeping in the eye of a tornado. I'd never had vertigo before but I know people who have, so I immediately recognized what was wrong - as opposed to turning to my girlfriend and screaming, "What have you done to my brain, demon woman!"

It got even worse when I tried walking to the bathroom. Like I was on a violently rocking boat. Worse than even that was the nausea. I was getting seasick in a townhouse. Damn you, inner ear! I'm stabbing your ass with a Q-tip! I actually tried to vomit, but my gag reflex makes me a bad candidate for bulimia. I popped a couple of ginger pills to deal with the nausea, and eventually the vertigo faded away by late afternoon.

Luckily the vertigo's been much milder the following two mornings and disappears by lunch. But I'll probably have to make a trip to the doctor to figure out what the true culprit is, as vertigo's a symptom of any number of things. While having dinner with a doctor buddy on Saturday, for instance, he said it could be a nerve disease that can lead to permanent hearing loss. That's what I get for trying to get free medical advice from a friend. Or it could just be a viral infection and be fine a couple of days later. Or it could be that my demon woman girlfriend sticks my brain in a blender while I sleep.


2. Steelers
As a sports fan I've been bludgeoned in my testicles repeatedly the past 12 months. The Angels losing to the White Sox. Stanford losing to fucking UC Davis in football AND basketball. Maggie Fitzgerald becoming paralyzed during the women's boxing championship in "Million Dollar Baby." But the Steelers beating Indianapolis and the crooked refs made all the suffering worth it. Nevertheless, that fourth quarter practically made me throw up - it was that ... fucking ... insane.

Lord knows if the Denver game will be anywhere close to being that crazy. I don't know if my stomach or sanity can take it. The Steelers have always played like shit when it came to AFC Championship games at home, so it could be a good thing that they'll be the visiting team this time.