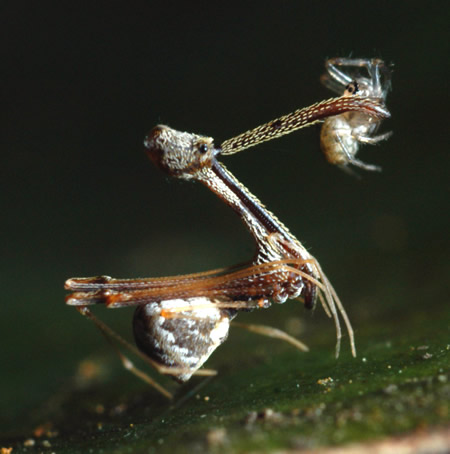 The cuddly and adorable Assassin spider.

Did I ever tell you about the time in college when I woke up with something in my ear? Quite groggily, I stuck my finger in there and tried to dig it out. It felt like a small pebble, just a tad smaller than a dime. If I was fully conscious, I think I would've been mildly impressed with my ear's ability to produce such a mighty ball of wax.

It wouldn't come out. So I turned my head and shook it downward, hoping that gravity would do a better job of removing the object than my finger.

And out popped a spider. Plop, right on my pillow.

During an evening stroll the spider had come across my head. I don't know if it decided my ear canal was a nice and cozy spot for a quick snooze, or if it planned to live there for awhile, maybe raise a family. I was just thankful it didn't go into one of my nostrils, or mouth.

Maybe that's why I didn't kill it. Or because of the possibility that one day, it would eat a mosquito. But I scooped it up with my hand and hurled it out the window. Even to this day, I catch spiders and throw them outside instead of crushing them with my fingers of death.

But I should've killed that one, because it turned out that the dime-sized fucker had bitten my ear. Itched like a mother.