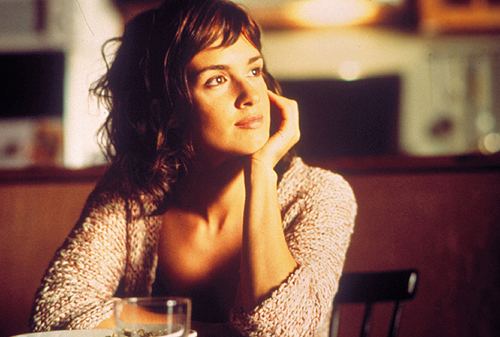 Just saw "Sex and Lucia" last night. This is one of the four scenes in the movie where Paz Vega's actually wearing clothes. What I learned from this film is that Spanish women have magnificent breasts.


Pacific Dining Car
Pacific Dining Car's one of LA's oldest restaurants and probably its oldest steakhouse. It's definitely the only 24-hour steakhouse in this city. From what I've heard, the steaks are still pretty damn good after all these decades; but this past weekend we tried their breakfast. I've lived in LA for most of my life, but I'd never bothered to check out Pacific Dining Car 'til Saturday. I'd always assumed it was a dark, dusty place filled with people who were dry and aged like the rib eye. And I was right ... for I am a genius. As for the breakfast, it was heavy but pretty damn satisfying [insert sex with obese woman joke here] - which is what you'd expect from a decent steakhouse. The bill was also steakhouse-esque: $50 for two people, although this had a lot to do with the snooty girlfriend ordering the Blue Crab Benedict. Oh, and the coffee was fucking four bucks. At least it was strong, and presumably made from beans hand-picked by fragrant maidens. So if it's midnight and you're in the mood for steak & eggs with a side of scotch, I strongly recommend this place.

Joe's
Joe's probably the most famous restaurant in Venice. It's not cheap either. But surprisingly, the brunch is reasonably priced. Which explains why I'd recommend making a reservation for a breakfast my girlfriend considers to the best in SoCal. Afterward, you can stroll past the art galleries and furniture boutiques of Abbot Kinney and remember when Venice was filled with Crips, vagabonds and stoned surfers, before they fled in terror from the army of ferocious rich people. Joe's is a pretty lame name for a fine dining establishment. If I ever open a high-class eatery, I'll either name it "Zagat Said We Cost $55? Try $100, You Gullible Anus" or "Really Small Portions On Really Big Plates With Some Powdery Shit Sprinkled On The Edges." I guess neither name choice would fit well on a business card.

Literati Cafe
I don't know why my girlfriend often insists on eating here. She never really likes what she orders and ends up eating from my plate, that shameless hussy. That's because I always order this tasty omelette that's on the Day's Special menu - forgot its name. It's probably their one good breakfast dish, yet she never orders the damn thing, waiting instead for me to order it for imminent plundering. I suppose she's drawn to the warm, studious ambience at Literati. It's filled with people staring at their laptops, trying to write their law school papers or screenplays about magnificent Spanish breasts. Unlike the other two breakfast places mentioned in this entry, however, the bastards at Literati charge for coffee refills.