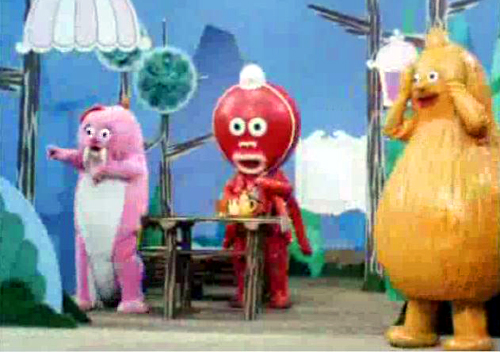 The theme song from Gimme Gimme Octopus has been dancing a jig inside my skull all weekend.

So the good news is that I hit my target weight of 180. Of course this was only achieved after I dropped five pounds during a 4-day period in which I only ate rice porridge and bananas, which were then promptly squirted out of my ass. Now that I'm healthy, I can only assume it's only a matter of time before I gain most - if not all - of that weight back. Like tonight for instance, I ate half of Furaibo and washed it all down with a pint of Sapporo at home while watching The Sopranos. That David Chase really loves dream sequences. And me, I really love spicy fried chicken wings.

Came across MyDeathSpace, a morbid little site which posts information about MySpace members who've died, as well as linking to their still-open accounts. What struck me, other than the fact that almost all of them were killed by automobiles, was how people use the comment section of their dead friend's MySpace account to communicate with them. It's the online equivalent of visiting their grave and talking to their tombstone. If there's an afterlife, I wonder how many of the dead people continue to check out their MySpace accounts.


DEAD PERSON: Wow, that's like the third comment she's left this week! She didn't even leave a single comment back when I was alive - I don't even think she friended me back 'til after I died. Good Lord.

GOD: Mother of me, are you checking your MySpace account again? You're in heaven now, don't you have anything better to do, my child?

DEAD PERSON: I probably do, but it's not like I can't do it later. I'm only here for, what, an eternity?

GOD: Do that sarcasm shit with me one more time and I'm sending your ass straight to hell. I'm God, alright? And they've only got dial-up connections down there. So log off pronto and bring me a meat-and-bean burrito from Tito's.