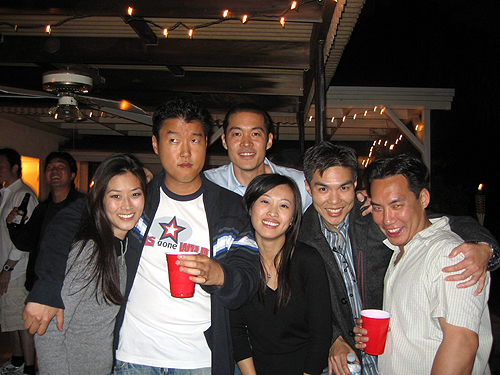 Girlfriend went to Vegas for the weekend. So how did I spend my Friday night as a free man? I had dinner and coffee with some friends and then went home. They tried to drag me to see "An American Haunting," which is based on the only case in U.S. history where a ghost caused someone's death. But after what happened with that woman, I haven't been the biggest fan of ghost movies. The spirit world has turned me into a large vagina.

At least on Saturday there was a house party to go to. I haven't really partied much at all lately, as it interferes with my death machine construction; so it wasn't too surprising that I got tanked in a jiffy. But as you can see from the photos in this entry, I wasn't alone in my drunkeration. Thank you, Jesus, for my red plastic cup-toting friends.

Sunday I woke up feeling extraordinary ... that is if extraordinary means "bludgeoned with your own internal organs." I grabbed some pho, and halfway through the bowl I realized that a month from now I'll be eating this every single day. Which is fine by me, because I dig pho - that's unless the pho tastes different in Vietnam, you know, on account of their taste for human flesh.

My girlfriend finally got back from Vegas, still pissed about the De La Hoya fight. She'd put money on him winning in the seventh round, and he won by TKO in the sixth. What had really pissed her off was that she was going to place a second bet for the sixth round, but her friends talked her out of it. It's eerie how she's acquired this recent knack for sports betting. But not eerie enough for me to quit my job and live off of her. Then we drove all the way to San Gabriel Valley to her sister's house for her dog's birthday. I actually didn't mind the trip because they live close to the best taco joint on the entire planet. It's so damn good I don't mind it being in the kind of place where when I park my car, I find myself calculating the odds of it being gone when I walk back outside. 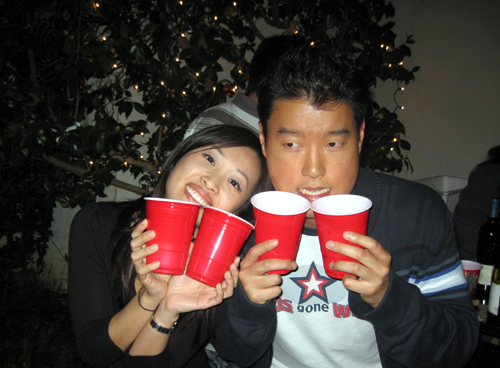