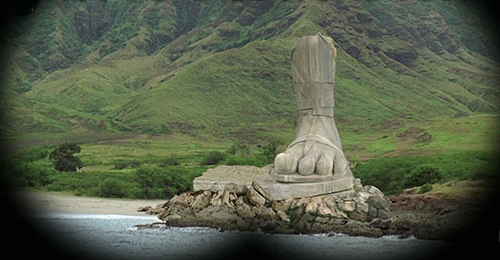 Colossus of Rhodes? Atlantis? Aliens? Lost civilization of cartoon characters? Or, according to my "Lost" clues source, a Thomas Love Peacock reference?

Met today with the guys who did the first series of Websites for "Lost" including the "Lost" site, the original Hanso Foundation site, and the Oceanic Airlines site. They mentioned how they'd check up on "Lost" messageboards and giggle at how "Lost" fanatics would extract the craziest theories from every minute, and often meaningless, detail on their sites.

Those were the letters that were colored grey in the job descriptions on the Monster-sponsored Hanso Foundation career site. So far, I'm guessing the secret message is either "asylum inmate," "simulate many" or "I me Mayan slut."