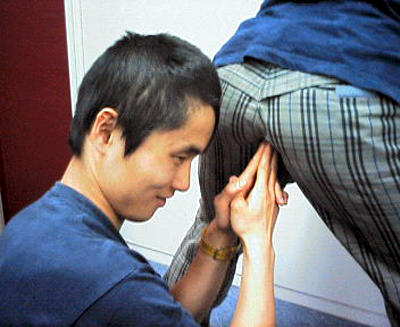 For those of you not familiar with the despicable art of Kancho.

Today I was reminded that genetics can be a motherfucker. Instead of inheriting my dad's well-defined cheekbones, I inherited his allergies. It's not all that bad - I get hay fever for only a week or two every year. Out of the blue today, I started sneezing after lunch and continued sneezing til I finally popped a Claritin at home. Every time I have a sneeze attack of that magnitude, I'm left sweaty, drowsy and hungry at the end. Yes, hungry like the wolf. I would've killed all of Duran Duran for a bucket of KFC Original Recipe. For the doctors reading this, does this have something to do with endorphins?

For the morbidly curious, I came across an online collection of suicide notes. Although I'm not sure if one of them qualifies as it ends with "P.S. Call me if you can." That reminded me of a "Twilight Zone" episode where an old lady kept getting crank calls in which someone breathed heavily and moaned on the other end of the line. The phone company eventually told her that a phone line had been severed during a storm and somehow imbedded itself in her husband's grave. So it was him calling her all along. Why the heavy breathing and moaning? Maybe the afterlife is one long orgasm.