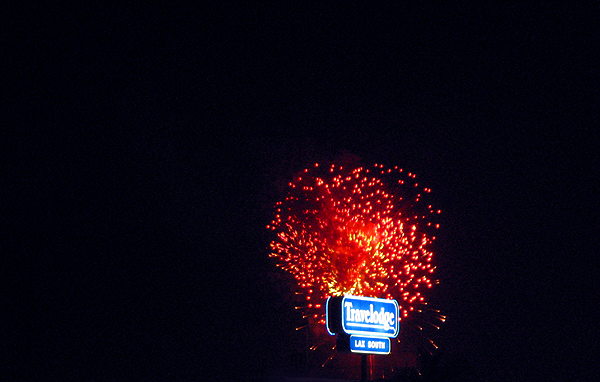 I think everyone should have the opportunity to fly over a large city at night during Independence Day at least once in his or her lifetime. While flying back from Vegas, I looked out the window and the entire surface of LA was crackling and sizzling with fireworks as far as the eye could see. Every block, even every house, it seemed, had some form of gunpowder extravaganza going on. Didn't want the plane to land: it was one of the most amazing things I'd ever seen. I wanted to take a picture of the whole thing, but I knew a photo wouldn't do it justice. So I'm posting this pic that I took from an airport parking garage instead.

Every time I go to Vegas, I'm reminded how truly enormous human beings are in the non-California parts of the United States. It made it almost impossible to walk through the packed casinos and Caesars Forum Shops - remember that scene in "King Kong" when everybody's trying to run through a canyon without getting trampled by stampeding dinosaurs? It was exactly like that, except instead of stampeding, these massive creatures waddled.

Had dinner at a friend's sushi restaurant, Kaizen, which is across the street from Hard Rock. I remember when they moved to Vegas last year to open their first restaurant, and now they're already planning to open their third. I'm not surprised - the food is pretty damn good. The interesting thing about the Hard Rock location is that most of their dinner customers show up after midnight - bartenders from TAO, waitresses from Nobu, and strippers from Club Paradise. So as of next week, they'll probably be the only sushi restaurant in Vegas open til 6 AM. If you're in town, I highly recommend a visit. At the very least, if you show up around 4 AM, maybe you can get a lapdance with that spicy tuna salad. I'm sure you can think of a better tuna/stripper joke than that, 'cause all I can think of this instant is slumber. Anyway, their website's here.