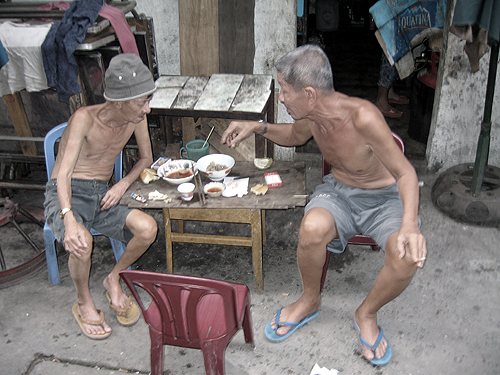 Was checking out that travel blog Gadling this afternoon and guess what was the Photo of the Day? And thus begins my career of photographing semi-nude elderly men.

About once every year or two, I'll have a pebble smack my windshield on the freeway. There'll be a really loud noise that scares the shit out of you, but no damage. It happened to my car again last week, and for the first time, it cracked the glass. And by crack, I mean it was seven inches long - or exactly half the length of my penis.

So I ended up having to replace the entire windshield for $400 - or exactly half the length of my penis. But it didn't bother me at all. Not when you have a doctor friend telling you over dinner about how a construction worker came into the hospital and ended up having his eye removed. Apparently he'd been hammering something; and somehow a tiny shard of metal from the hammer broke off and flew into his eyeball. If that wasn't bad enough, the shard of metal happened to have bacteria on it, the kind of bacteria that rapidly turns your eyeball into a bloody, useless pulp. And just like that, the guy will have to endure one-eyed Jack jokes for the rest of his life. Unless his name's not Jack.