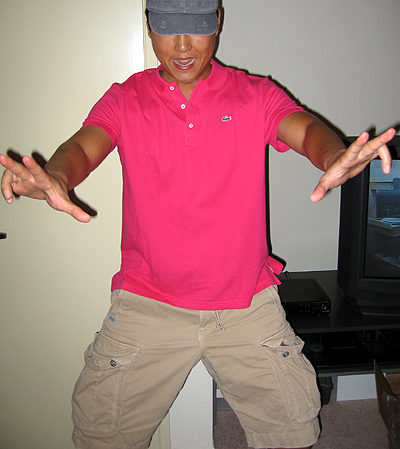 Me modeling the pinkest shirt in the universe with a pose I'd seen in a kung fu flick called "Mantis Fist and Tiger Claws of Shaolin." Yes, I actually do have more than eight fingers.

Girlfriend ordered a polo shirt for me online. I came home, opened the Fed Ex package, and was blinded by powerful pink beams shooting straight into my unsuspecting eyes. My corneas instantly sprouted flowers.

Holy shit. This was the pinkest shirt I've ever seen. And I've seen many, as they've become surprisingly popular lately. But all those pink shirts were this shirt's bitches. Why just by merely looking at this shirt, I immediately began to lactate. If a gay guy had worn this shirt, he'd probably get beaten up by other gay guys. Nevertheless my girlfriend liked it. I told her I wasn't man enough to pull it off, noticing that my voice had already gone up an octave higher while responding to her.

More than anything this seriously undermines her credibility as my fashion dictator. Up until now, she'd pretty much decided which clothes would go on my body. This also went for shoes, hair styling products and even face lotion. Prior to meeting her, you see, I had the hair and clothes of a hobo. Office casual meant duct-taping various dead animals around my ass and groin, then use their festering blood to draw runes on my face. All kidding aside, I was cleaning out my closet today and came across an old shirt from Structure. I miss Structure ...

So I still have to trust the girl to make my fashion choices for me. But I've learned to draw the line when it comes to apparel that magically transforms your testicles into baby bunnies. We went and exchanged that pink shirt today for something black. Granted, it's not the most original color for a polo shirt. But at least I stopped lactating.