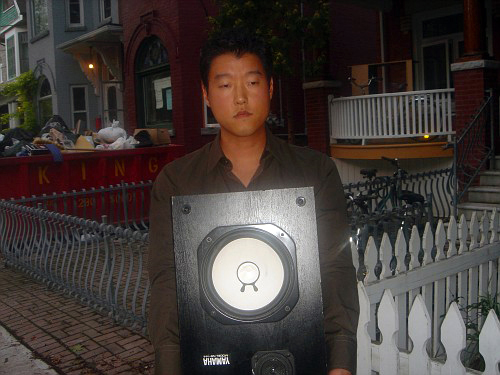 Stealing home audio equipment from Canadians is a somber ordeal.

That pic was taken by Paul just after 7 AM toward the end of our last night in Toronto (Hence the haggard expression). We were on our way to this restaurant to grab some breakfast. The restaurant, as it turned out, was run entirely by this family of over 20 siblings. According to the faded newspaper clippings on the tabletops, the mom and dad had three kids of their own and adopted the rest. Very inspiring story. For instance, I felt inspired to open a business and adopt an assload of children to use as free labor. Except instead of a restaurant, I'd open a business that can better take advantage of their tiny nimble fingers, such as assembling watches, artificial hearts, or those cool retractable daggers I keep seeing in movies that bad guys always hide under their sleeves.

I'll try to post trip pics soon, depending on how quickly I can fix my fricking PC. I wish my Norton AntiVirus was a person, so I could beat him to death with a shovel and drop off his bloody corpse in front of the Symantec office. I know that killing won't bring back my computer, but at least it'll feel pretty good.