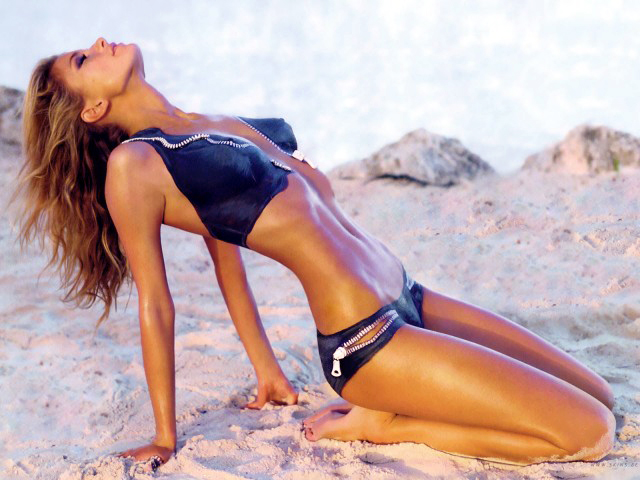 I was originally going to post a photo of Evangeline Lilly, but she's gotten inexplicably manlier looking after the first season of "Lost." And as none of the other female cast members do it for me, I'm posting a pic of Marissa Miller instead. My apologies to the male viewers who are at this moment vigorously thrusting their groins into the bottom of their desks.

How geeked am I about TV this week? Both "Lost" and "Battlestar Galactica" are having their season premieres! These are two of my favorite shows right now, with the others being "Scrubs," "Entourage," "The Sopranos," "Curb Your Enthusiasm" and "Family Guy." And by favorite, I mean these are the only programs I watch regularly. For this year only, I've added Survivor to my TiVo's Season Pass Manager, and that's only til my friend's brother gets eliminated. I've had people try to coerce me with firearms and sorcery into watching "Grey's Anatomy," "24" and "Nip/Tuck;" but I've got a limited bandwidth for TV shows nowadays. The rest of my bandwidth has been taken up by Netflix, wondering where my life is headed, and verbally abusing my fantasy football team ("Westbrook, you cocksucker!").