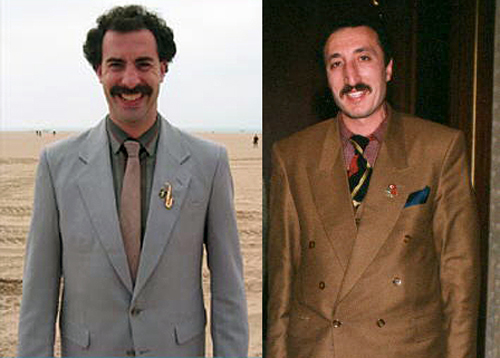 Other than the fact that it's spawning a new generation of college kid catchphrases like "High-five!" "Sexy time!" and "Make liquid explosion!" (My personal favorite is "testes satchel.") I'm really looking forward to seeing "Borat."

I'd assumed that everybody knew that he'd based the character on Mahir of "I Kiss You!" fame, but apparently that's not the case. According to several articles, Mahir's pissed that he's not getting any credit, money, or women from the mighty Borat empire. I guess Sacha Baron Cohen's claiming he based Borat on a Russian doctor he'd met at a party. I find it difficult to believe, but I can't dislike the guy - the dude is fucking hilarious. He may have ripped off Mahir's "I like sex!" but he more than makes up for with "She must be tight, like a man’s anus."

(EDIT: Got an email this morning from someone calling himself "Johnny the Monkey" who directed me to this link that states that Cohen created Borat in '94 - about five years before Mahir's famous site. And my testes satchel is even toastier than yesterday. I think the sun has relocated to somewhere around San Bernardino.)

80 degrees at the office, which probably meant 90+ degrees for the rest of LA. My testes satchel was toasty.

It's official. Here she was last night on Letterman, looking about 50 pounds lighter and 100 times prettier than in her previous life as a Doritos receptacle. Guess she was prepping herself for her imminent future of manhunting. But after having shared a bed with K-Fed for two years, she may be contaminated beyond repair - like a vaginal Chernobyl.