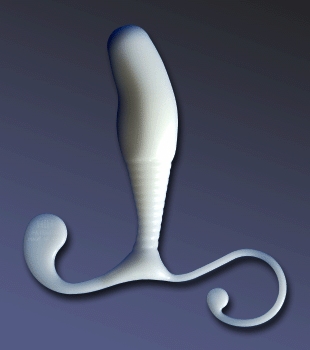 This is the new iPhone. Really.

I guess this would put me in the majority, because as my past entry indicates, I'm still a virgin when it comes to butt sex. And for some strange reason, I'm fine with that. My penis may never ever know the dark, secret wonders of the magical chocolate cavern.

The amusing part of the article is the last third, when they discuss the other half of hetero anal action: that is, when the female sticks her finger or something else up the guy's bunghole. Why? Because that's where the prostate is - or as they call it in the article, "the male G-spot, a.k.a. the P-spot, a.k.a. the He-spot." I'd always assumed the male G-spot was the dick, but the medical community apparently feels otherwise. A doctor invented and the FDA approved a device called the Aneros, which is pictured up there (How the hell did the FDA test this? Lord knows how many Guinea pigs and lab monkeys needlessly suffered).

When you look at the Aneros, it seriously looks like something an advanced race of aliens would use to engage in battle, versus something a married couple in the East Village would use to engage in buggery. I don't know how seriously your girlfriend or wife would take you during sex with what would appear to be white insect antennas poking out of your sphincter. But who am I to judge? I'm a virgin. Maybe the Aneros will become really popular, and Steve Jobs will present the iAneros at Macworld next year, complete with built-in WiFi wireless networking and a 2-megapixel camera.