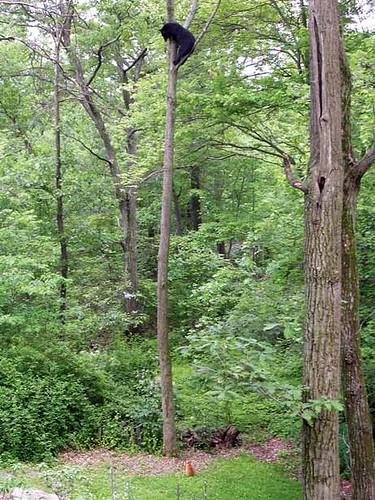 I'd call this bear a pussy, but as you can see, it was ironically a pussy that chased it up the tree.

Our friends invited us to see the The Kims of Comedy tonight at the Wiltern. Of the four Korean-American comedians, I'd seen Bobby Lee and Dr. Ken perform before. Other than Bobby Lee, my expectations for an evening of knee-slapping hilarity weren't all that high. In all fairness, the only time I'd seen Dr. Ken perform was one of his first gigs - so he was understandably unimpressive. But surprisingly it was one of his jokes that had me laughing the hardest tonight. The man really does a mean Vietnamese impression. As a matter of fact, all of the "Kims" (none of the guys' last names was Kim and two had Irish last names) were great, not just Bobby. And not a single wife-beating joke.

Is it that Koreans are really that funny? Are we the drunken, chain-smoking jesters of the Asian world? Or is it that the other Asian people are relatively serious and boring as shit? I've seen enough videos of Japanese men playing toilet pranks on each other while wearing diapers to know that this is definitely not the case. One theory is that since our country's history is filled with one heartbreaking tragedy after another, we developed a powerful sense of humor as a way of dealing with the sadness ... until the day we take over the world and annihilate our enemies.

If you haven't seen the show, I highly recommend renting the Kims of Comedy DVD on Netflix. Enjoy it while you can - because after our day of global vengeance, Korean people are going to stop being funny, like the Chinese.