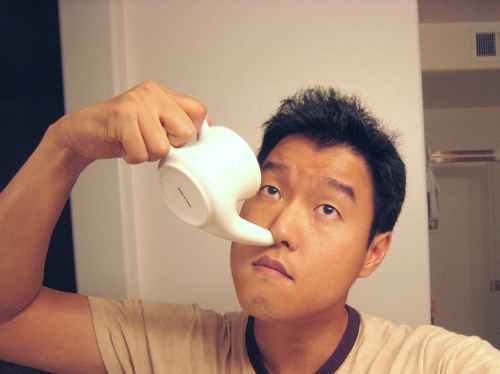 I inherited good things from my dad. Like I will never have to worry about being pale for the rest of my life. Even if a giant comet crashed into the Earth and blotted out the sun, I could still get a mild tan from the flames of a burning carcass. But I also inherited some pretty shitty things. Like allergies.

They got really bad when I hit junior high school. The pollen and other microscopic Satans would swarm into my fragile sinuses as soon as it was spring, and turn my nose into a 24-hour snot factory. I was blowing my nose so often that I'd develop a rash around the rim of my reddened nostrils; and I even think I wrecked my sense of smell.

This thankfully discontinued once I got to college. For some reason, the Bay Area was a safe zone where my sinuses were able to frolic and roam free without fear of vicious attacks.

Ever since I got back to LA, I'll have allergies for a week or two each year, where I'll be sneezing and oozing slime. And that's all ... at least according to me. My girlfriend has claimed that there are occasions when my sneaky allergies will manifest itself when I least expect it, like when I'm unconscious.

Every once in a while, I'll go through several nights of snoring. Presumably because of my ninja-like allergies. So one day, after an evening spent elbowing me in the face, she urged me to get a neti pot. As you can see in the photo above, it's a small pitcher that you use to wash out your sinuses. A nasal enema, if you will. You fill it with warm water, mix a little table salt, stick that nozzle into your nostril, and then tilt your head so the water can drain out your other nose hole.

My dad used to do this. Except without the neti pot or warm salt water. He'd snort cold water right out of the bathroom sink, and recommend that I try it. I refused, as I preferred to freebase el agua. But years later, I found myself sneezing nonstop in Buenos Aires without any allergy medicine. So I snorted water while taking a shower, and it worked.

I've been using the neti pot for a week now, and it takes some getting used to. For one thing, even though the warm water is supposed to make it less irritating, it still feels strange having water going in and out of your sinuses like it was a train tunnel. Secondly, until I improve my technique, the water often dribbles down the side of my face like drool.

It works. At least for the snoring part, it seems. I stopped snoring the very first night I used it. Two nights later, when I didn't do it, I started snored again. So I've continued using the neti, much to the delight of my revirginized sinuses.