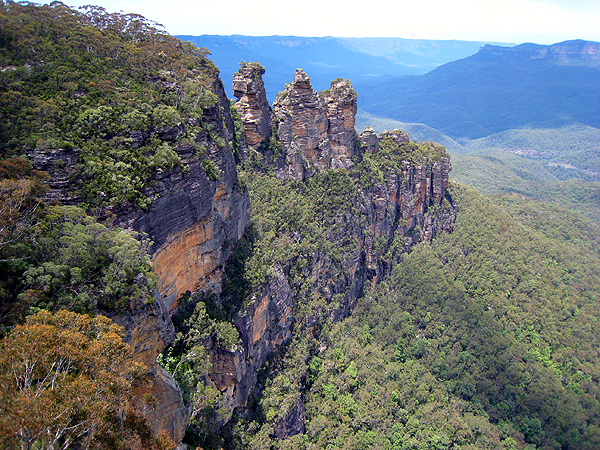 The Three Sisters and Jamison Valley can be seen from Echo Point. It is from here where I first realized that Australia is a nation of lying bastards, for there are no mountains to speak of. In fact the most prominent thing you see is the immense valley; and isn't valley the exact opposite of mountain? However, there is a slightly bluish hue, which apparently comes from eucalyptus tree emissions (thank you, Wikipedia). 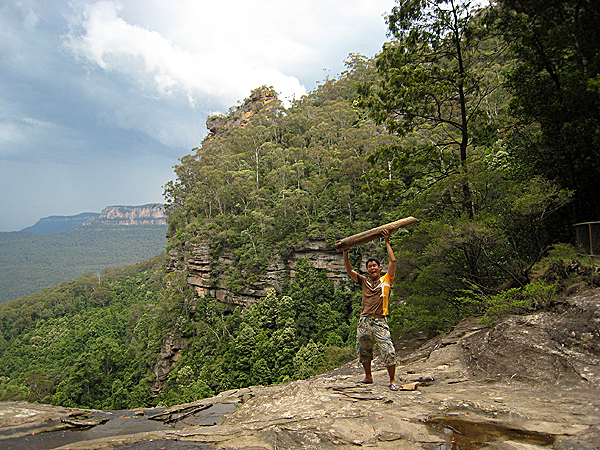 This pic was taken on a ledge, next to the bottom of a waterfall - where this shot was taken. As scenic as the waterfall was, the view of the valley was stunning. So stunning that I lifted a log like an idiot. I mean what better way to show your appreciation for the splendors of nature than by hoisting a large piece of wood over your head? It was at this point during our hike that it started to sprinkle, and thus began the most memorable part of our Blue Mountain excursion ... 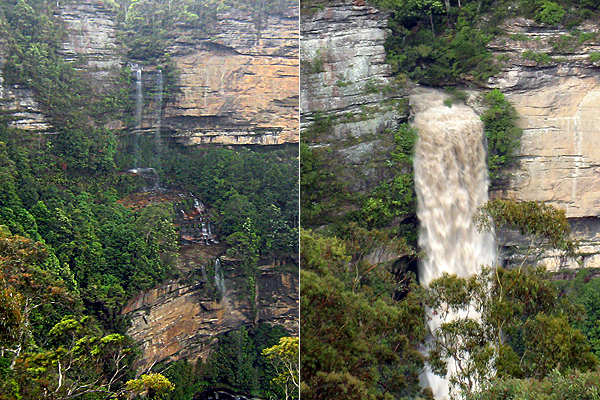 As we started to hike quickly back to the nearest visitor center, the sprinkle turned into rain. Because it'd been raining on and off all day, we at first decided to wait it out under some trees. But the rain kept coming. After a while, I made a judgment call and decided to just keep hiking, even though I had no idea how far we were from an actual building.

Then the rain really started to come down. Soon the raindrops were replaced by thick sheets of water. And then it was like an entire lake was being dumped on my head. I've never experienced rain like this in my entire life. Did I mention there was hail? Tiny ice balls began pelting me. Throughout the forest, you could hear hikers actually screaming as they all frantically ran for cover. By the time I finally found the visitor center, the hailstones had gotten bigger, and it felt like I was being stoned for committing adultery.

Inside the visitor center, I thought I would never be dry again. Paul's friend, Amber, who was never that excited about the hike to begin with, was utterly miserable. For some reason she'd carried a purse on the hike, and it got filled to the rim with water.

To give you an idea of how much rain fell, the two pics above shows the same waterfall. The pic on the left was taken when it started to rain. The pic on the right was taken less than 40 minutes later. The employees at the visitor center said they'd never seen the waterfall that engorged in the years they'd worked there.