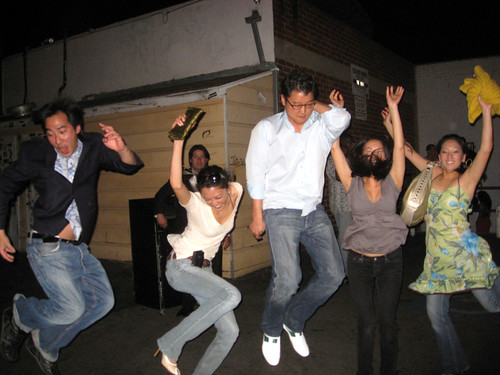 All pics taken by Paul.


The weekends of April have been somewhat insane, culminating in last week's re-bachelor party in Vegas. So the consensus was that Friday night would be a "chill" night. It began with a dinner at Yissi Hwaro, a Korean meat buffet. It was my first time there, and I was saddened to see that it'd taken over Intercrew's old space. Intercrew was one of the first places in K-Town to fill my young, innocent torso with liquor; and now it was filling me with all-you-can-eat kalbi, samgyupsal and chadolbaegi.

Afterward, we headed to The Room in Santa Monica. If you saw "Swingers," you might remember the original The Room - which is in Hollywood - as the very first bar they hit and then quickly left, declaring, "This place is dead anyway." I wished the Santa Monica version was dead, because I love small, dark, empty bars. Tonight, for some reason, it was filled with people and my seething hatred.

As I can tolerate secondhand smoke better than crowds, I ended up seeking refuge in the smokers patio, where Paul paid me a visit with what would be the first of several Patron shots. From that point onward, the evening lost its "chill" status. Next thing you know, Paul and Heidi were daring each other to terrorize random bar patrons with a deadly array of 80's dance moves.

Naturally, after 1 AM, everybody decided to go to Yuu Yuu Karaoke on Sawtelle. While they don't sell alcohol, people are still allowed to bring in their own beverages - often from the liquor store across the parking lot. Next thing you know, a bottle of Goose appeared inside the room, probably as a result of dark sorcery ...