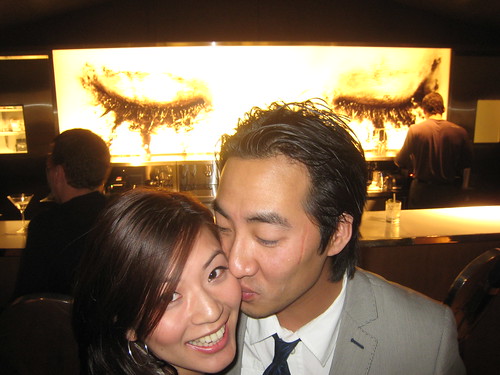 A happy non-duck couple at Katsuya.

In front of our office building, we've got a giant koi pond. For several years, ducks show up in the middle of spring and hang out for a month or so. They used to lay eggs and raise ducklings there, but the building management got sick of cleaning the duck turd and got rid of them. This year it was just two ducks, a male and his wife.

The pond used to be choked with algae, so the ducks rarely left the water to feed. But now that it's clean, the ducks wander over to the lawns to nibble on the grass. They'd been wandering further and further from the pond, so I wasn't too surprised when my coworker told me that the female duck was dead.

She'd been hit by a car while waddling across the street and was lying on the median, where the crows had been pecking at her. While walking to lunch, I noticed that the male duck was resting next to his wife's carcass. Poor bastard probably thought she was still alive. According to my coworker, he hadn't left her side since she was killed over 12 hours ago. He was still there when I drove home.

Ducks don't love, right? It's just blind instinct. Or maybe it's the same love humans experience, except ducks don't write songs or blog entries about it.