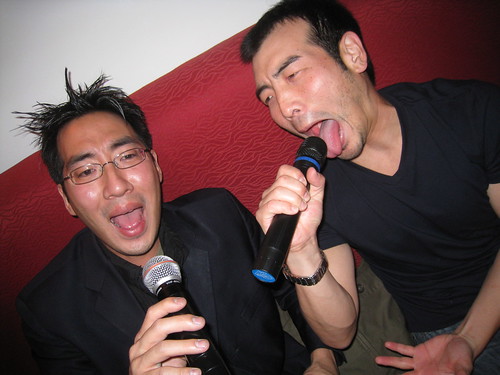 Mike's a very talented singer (He's to the right of Daniel). In the inaugural season of "America's Got Talent," he and his three friends made it all the way to the season finale. And now those guys (minus one) are in a group called Tatum Jones.

But Mike also has another passion. He likes throwing things at people's testicles.

I found this out when we were playing Cranium. You know that lump of purple clay that's used for Sculptorades? He formed a small ball and tossed it at my testes when I was trying to spell "anagram" backwards. When he was preoccupied with Humdinger, I returned the favor and hurled the clay ball at his crotch. This went on the entire game, to the point where we were too paranoid to care who won or lost. When the game ended, he and I both had our hands protecting our privates, so he tossed a squishy stress ball at Daniel's unsuspecting nuts. Then Paul's genitals got tagged.

About 50% of the time we're hanging out and drinking, Mike will inevitably throw something at your balls. Keys, water bottles, remotes, small infants, etc. This past Saturday, we were having a farewell get-together for one of my all-time favorite bars, Daruma, which closed this week. And after several double shots of Patron, Mike was at it again. Hence these photos.