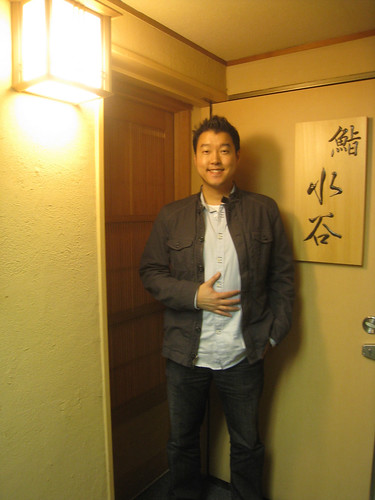 I figured I'd interrupt my drinking-related posts about my Tokyo trip with a food-related one. Then again, people on Livejournal seem to prefer entries about things that pleasure the stomach rather than ravage the liver.

The first pic's the only one I could take at Mizutani, which is the best sushi restaurant in Tokyo ... and therefore the world? Only two sushi joints got three Michelin stars in Tokyo. Of the two, Sukiyabashi Jiro's more famous - in fact, Bourdain gushed that it was the best sushi meal of his life. But after further research, I came to the conclusion that even though Mizutani once worked at Jiro, he has pulled a Vader and surpassed the master.

The restaurant's in the basement of a narrow, nondescript building in Ginza - even my friend who works in Ginza had trouble finding it. They only seat 10 people at a time, so I didn't expect to get a seat on less than a week's notice (normally there's a month wait or longer), but I lucked out. The benefit of such an intimate setting is you get to watch the guy work up-close. His knifework is hypnotic. Everybody was silent as we all just sat there and watched the man do amazing shit with dead sealife. Too bad they wouldn't allow pics. Anyway, here are places where I did get to take photos ... 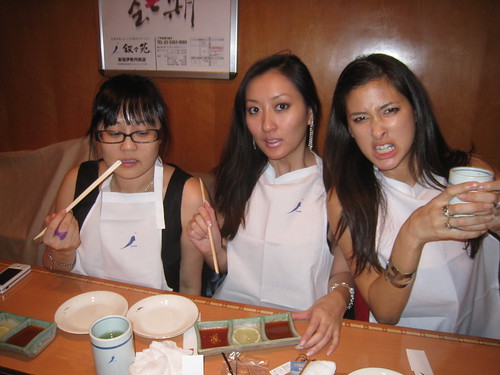 After the Macy Gray event at AgeHa, we had a post-concert meal at this amazing yakiniku place called Jojoen in Roppongi. It's a popular chain - I remember eating at the Shinjuku location during my first Japan trip, which featured a fricking harp player. The amusing thing about Japanese restaurants is that several places offer bibs. Melody looks ready to eat Mothra. 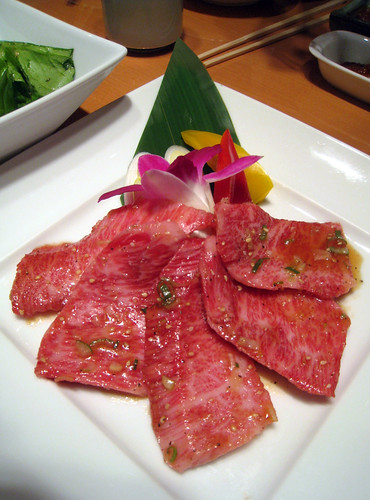 Being Korean, I usually scoff at yakinikus, but it's hard to scoff at a restaurant that serves only wagyu beef. 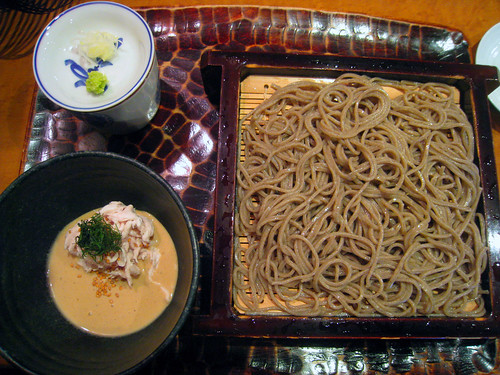 This was my last meal in Tokyo. We ended up eating lunch at this famous soba restaurant next door to Mai's place. Kenji got really annoyed that the service was so slow, so he scolded the waitresses and owner. Or at least I think he angrily scolded them, I can't tell with Japanese - it's such a damn polite language. Especially compared to Korean, which was custom-designed for bitching somebody out while beating them to death with your fists. 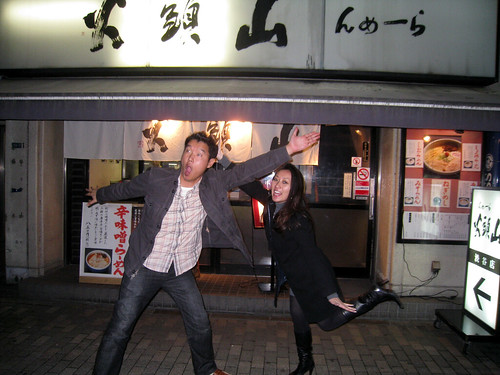 My favorite ramen in LA is Santouka. So you can imagine how excited we were to find the original location in Tokyo. And if you can't imagine, just look at this gay picture of us being excited in front of Santouka. 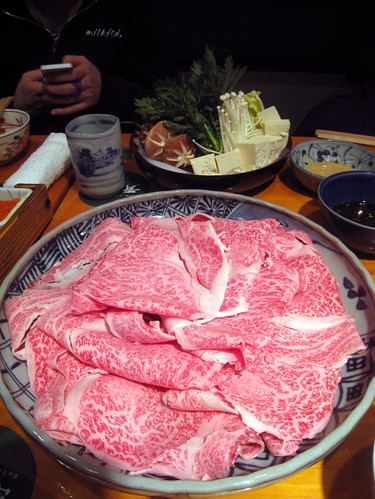 The cows in Japan must be made entirely out of fat. My friend Kenji decided to take us to a shabu-shabu/sukiyaki restaurant in Ginza, and he didn't bother to tell us that they only served Kobe beef. You just dip the beef in the boiling water for a couple seconds, and it tastes like you're eating a beef cloud in heaven. Insanely delicious.